Merry Musings #2 – The Way of Wyrd 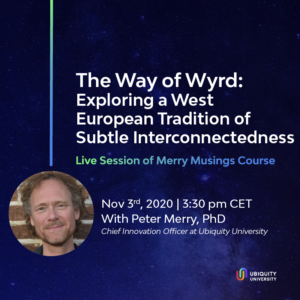 In the so-called “Dark Ages” Western Europe was home to the Anglo-Saxons and Norse. These cultures had great respect for the interconnected web of life that they referred to as “wyrd”. Over the last decades the Western world has imported Eastern concepts such as ch’i which have helped us to rediscover the sacred/hidden dimensions of reality. However, few people know that we had our own native concepts, language and practices for the subtle world. Brian Bates, in his book The Way of Wyrd, brought it to our attention, creating a novel based on an ancient manuscript in the British Library that tells the story of a missionary scribe being sent to discover the ways of the “pagans”. This Merry Musing will explore the world of wyrd and how it relates to eastern traditions as well as recent scientific discoveries.

By the end of this session you should be able to: